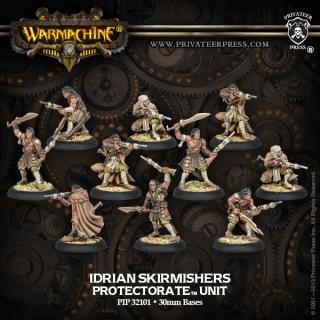 Masters of the unpredictable and lethal terrain of the Bloodstone Marches, most Idrian tribesmen converted to the Lawgiver but preserved their nomadic ways. They excel at stalking, ambush, and desert warfare and have turned these talents to the service of Menoth. With their ancient, curved blades and newly adopted rifles, these ruthless warriors cut down enemies for faith and coin across all nations of Immoren.

SPECIAL NOTE: PIP 32101 contains the same Mk II stat card as PIP 42003. The models in this box represent the same figures in the game. PIP 32101 replaces PIP 42003 and PIP 42004 by offering their contents in a complete unit. The replaced PIPs will no longer be available from Privateer Press beginning November 1, 2013.