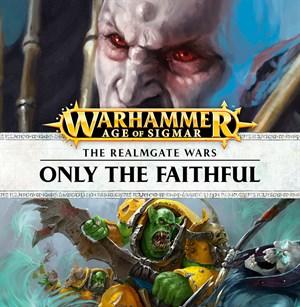 Realmgate Wars: Only the Faithful

THE STORY
After a gruelling journey, the warriors of the Hallowed Knights and Astral Templars have found their quarry in the Sea of Bones. During the hunt, Mannfred the vampire lord has raised a mighty undead host to protect the realmgate he has claimed. Whilst Ramus of the Hallowed Knights seeks the vampires head and Vandalus of the Astral Templars wants to reclaim the realmgate, both must fight as one and alongside their orruk allies if they are to triumph. Against one of Nagashs mortarchs, the test will be stern and only the faithful will prevail...