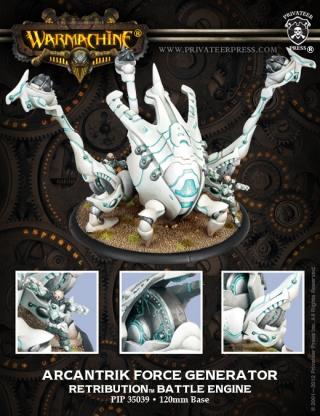 New as supplied by Privateer Press
The arcantrik force generator is a massive engine of war that houses
one of the most devastating and complex weapons in the arsenal of the
Retribution of Scyrah. Its teleforce cannon, which fires concentrated
bursts of kinetic energy, represents the very pinnacle of Iosan arcane
science. Blasts from the force generator shatter anything they touch,
reduce the ground to craters and rubble, and fling enemies aside like
broken dolls.

This model is composed of resin and white metal components.