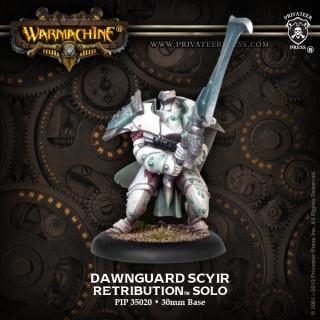 Ranking above captains and thanes, scyirs are trusted to lead large, mixed task forces that include all branches of their own order as well as other warriors of the Retribution. Most are sons and daughters of nobility who have proven themselves to be the elite of the elite, the pinnacle of Dawnguard martial coordination, with tremendous skill at coordinating myrmidons alongside their subordinate soldiers. Dawnguard Scyir comes in a blister. A player may field two Dawnguard Scyirs for each warcaster in his Retribution army.