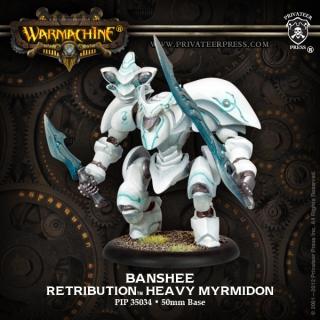 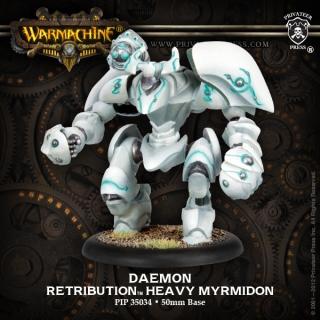 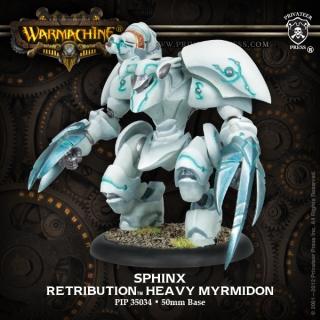 Recently unleashed upon the enemies of the Retribution, House Vyre's
myrmidons were developed with distinct capabilities all their own.

The Banshee emits a high-pitched wail that prevents enemy spellcasters from
using their magic, while its shrieking cannon hurls enemies aside with
raw sonic power. A powerful assault myrmidon, the Daemon smashes foes
with its rune fists or blasts them with concentrated arcane energy from
its vortex cannon. The Sphinx rends its enemies with twin force claws or
uses its runespear cannon to shatter an enemy?s mystical defenses,
making it more vulnerable to magical attacks.

This box set contains three color stat cards and one multi-part heavy
myrmidon plastic model (PIP 35034). Included are all the components to
assemble one of three heavy myrmidon variants: Banshee, Daemon, or
Sphinx. A player may field any number of these heavy myrmidons in a
Retribution of Scyrah army.