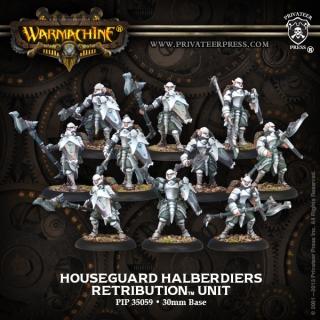 The majority of the houseguard are career soldiers who have spent years at drill and formation. Though they are drawn from dozens of lesser Iosan households, all follow an ancient shared tradition and undergo similar disciplined training and drills. At the orders of their superiors, ranks of halberdiers form a tide of rising and falling steel that can cut down masses of enemies with deliberate ease.

SPECIAL NOTE: PIP 35059 contains the same Mk II stat card as PIP 35010. The models in this box represent the same figures in the game. However, these models are plastic rather than metal. The replaced PIP will no longer be available from Privateer Press beginning October 1, 2013.