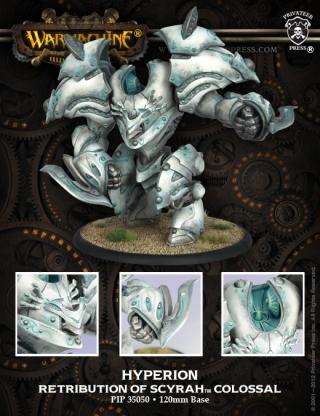 Hyperions tower over the vanguard of Retribution forces, armed with an incomprehensibly powerful starburst weapon capable of annihilating anything in its blast. Originally designed centuries ago to protect Ios from the unspeakable threat of dragons, the power Hyperions wield is so terrible they were banned from Iosan cities and relegated to deployment along its borders. Incissar Vyros, emboldened by victory, has now overridden that order to add these most formidable Iosan constructs ever developed to the Retribution’s arsenal.

Gamers note: With house shyeels use of shields the hyperion has the most health of any colossal and the most powerful of ranged weapons, infantry are wiped away by its dimension slicing Starburt attack. The energies unleashed by this weapon of war are little understood by the iosian's but its deadly effect is all to clear.