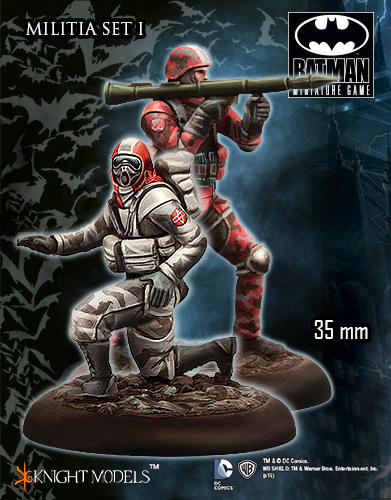 Two more soldiers to beef up Scarecrow\'s Militia, the Medic and Rocket Launcher toting soldiers have been spotted in Gotham. The Medic has a Gas Mask to prevent Scarecrow\'s Fear Master from affecting him from his duties, which is patching up the soldiers that have been injured in the Gotham takeover. The Rocket Launcher soldier is a Veteran from previous conflicts and has Good Aim to make his Rockets count for when he lets them loose. Militia 4 and Militia Medic are Henchmen for the Scarecrow Faction. White metal kit ready to assemble and paint .