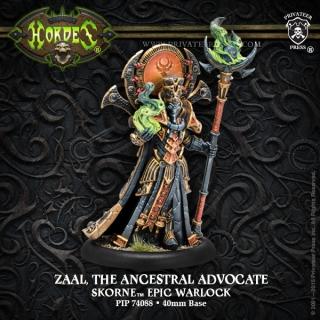 Supreme Aptimus Zaal exemplified the power of the extoller caste, whether communing with the honored dead or leading a host of ancestral guardians and immortals in battle. Mortally wounded in one such battle against Ios, Zaal refused to surrender to the Void, preserving himself with his last breath. His devoted followers recovered his sacral stone and fused him into a new form worthy of his stature. Zaal retains leadership of his caste as the Ancestral Advocate, and both his will and his connection to the spirit realm are stronger than ever.