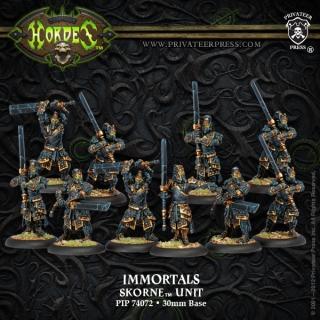 Those skorne warriors preserved from oblivion as sacral stones by ancestral guardians sometimes receive bodies carved from stone and hardened clay, take up weapons heavier than any mortal could swing, and go forth to fight again as Immortals. They may die a hundred deaths only to have a new body crafted each time and rise again to stand alongside the living and wage war eternal.

SPECIAL NOTE: PIP 74072 contains the same Mk II stat card as PIP 74027. The models in this box represent the same figures in the game. PIP 74072 replaces PIP 74027 and PIP 74028 by offering their contents in a complete unit. The replaced PIPs will no longer be available from Privateer Press beginning January 1, 2013.