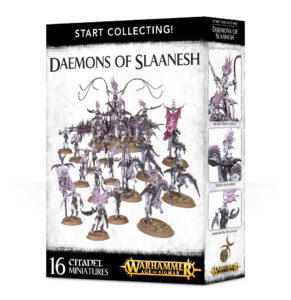 Mortals still indulge their desire and obsessions beyond all sense of decency, and glory in forbidden excess and while such horrors persist, so too will the followers of Slaanesh. Where once the Dark Prince compelled his subjects to greater depths of depravity, his greater daemons now rule in his stead. Champions of Slaanesh, however, still grow in power, gaining dark blessings and gifts This is a great-value box set that gives you an immediate collection of fantastic Daemons of Slaanesh miniatures, which you can assemble and use right away in games of Warhammer Age of Sigmar! Youll receive:

- an Exalted Seeker Chariot of Slaanesh, with 4 claw-armed Daemonettes either atop the chariot or riding the horned beasts that pull it;

- a set of 5 Seekers of Slaanesh, featuring ten different Daemonette heads, two different Slaanesh icons, and a host of other optional components;

- 10 Daemonettes of Slaanesh, armed with piercing claws, featuring a host of extra part and accessories for customisation.

Included in the box is an exclusive Warscroll Battalion rules sheet Cavalcade of Excess allowing you to collect, assemble and play with your new miniatures right away!