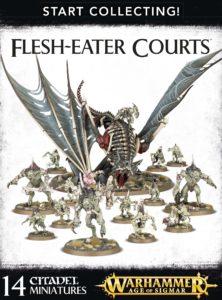 Hidden among the ruins of the Mortal Realms thrive the Flesh-eater Courts. Trapped within a horrific delusion, convinced that their cannibalistic feasts are splendid and grandiose visions of nobility, these courts of madness are each presided over by a malevolent and predatory Abhorrant Ghoul King. Beneath him, Mordants pick at decaying meat, snarling and spitting in guttural growls. Crypt Horrors and Haunters skulk in the shadows as deathless guardians, ready to claim entire corpses as their own.

This is a great-value box set that gives you an immediate collection of fantastic Flesh-eater Courts miniatures, which you can assemble and use right away in games of Warhammer Age of Sigmar! You’ll receive a Terrorgheist, three Crypt Horrors, a set of ten Crypt Ghouls and an exclusive Flesh-eater Courts Warscroll Battalion rules sheet, allowing you to collect, assemble and play with your new miniatures right away!