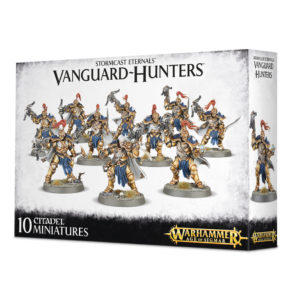 Bold raiders and expert scouts, the Vanguard-Hunters are the elite infantry of the Vanguard Auxiliary Chambers. Battle-hardened veterans, they are experts at using the terrain to their advantage. Their daring guerilla raids necessitate constant movement more than once has a thought-unassailable position been scaled and destroyed by a band of Vanguard-Hunters who have made themselves invisible during the madness of battle. Their weapons suit their role heavy-bladed swords and short-hafted axes cut through brush, briar and flesh, and boltstorm pistols are easy to fire on the move.??

This multi-part plastic kit contains the components necessary to assemble 10 Vanguard-Hunters. They come with a host of details, appropriate to their constant movement and veteran status: 2 shock handaxes and 10 sets of boltstorm magazines to attach to their waists, as well as grappling hooks and satchels. 2 arms featuring reloading boltstorm pistols are included as an optional assembly.

2 models in the kit can hold an astral compass perfect for nomadic guerilla warfare, this arcane device allows them to navigate impossible geometries with ease, and thus attack the enemy from angles they least expect.??

2 models can be assembled as Hunter-Primes these variants feature a unique, sculpted shoulder pad with a bear motif, and carry their own shock handaxe, with inflicts extra attacks in-game.??

This kit is supplied with 10 Citadel 40mm Round bases.