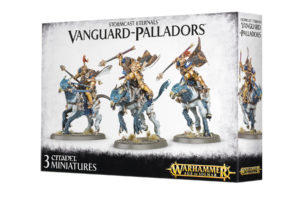 The Vanguard-Palladors of the Vanguard Chambers are without doubt the fastest ground elements of the Stormhosts. By transmuting into wind-borne lightning atop their Gryph-chargers, they can ride the celestial hurricane to circumvent the enemy army’s defences, before reassuming their corporeal forms to strike at the foe’s exposed throat with bolt, javelin, axe and claw.

This multi-part plastic kit contains the parts necessary to assemble 3 Vanguard-Palladors, mounted on Gryph-chargers and armed with boltstorm pistols and either shock handaxes or starstrike javelins. They come with 3 helmeted heads; these have the option of being modelled with either topknots or crests, depending on how you want your unit to look.

3 boltstorm pistols can be hung from the saddles of the Gryph-chargers, and 1 shock handaxe is to be mounted on the waist of a Vanguard-Pallador. Lots more details are included for hanging from the saddles – 3 grappling hooks, 3 drinking bottles, 3 bedrolls and the scalp of an unidentified creature, whose death was deemed important enough to commemorate...

One model can be assembled as the leader of the unit, a Pallador-Prime – this model is armed with a lunar blade attached to his waist in addition to the other weapons, and features his own shoulder pad, sculpted with a bear motif. He also has an optional bare head to replace the standard Stormcast Eternals helm.

This kit is supplied with a Stormcast Eternals transfer sheet and 3 Citadel 75x42mm Oval bases.