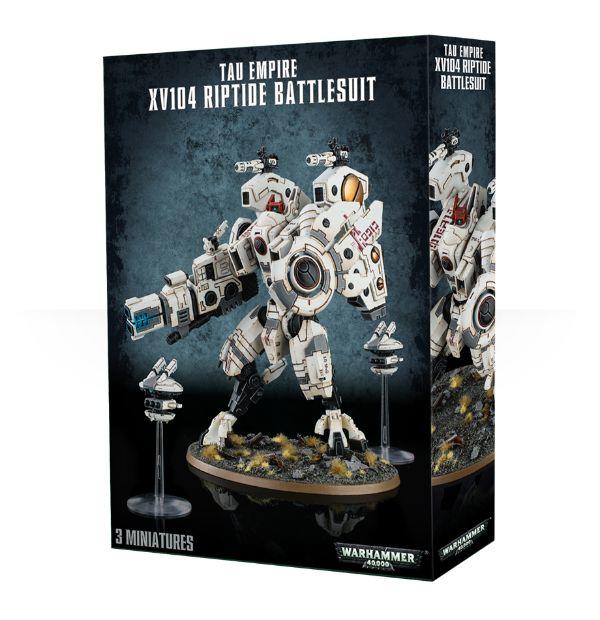 XV104 Riptide is the pinnacle of the Earth caste's battlesuit development. It stands twice as tall as the XV8 Crisis suit, but its movements are more like those of its smaller cousins than the mechanical stiffness displayed by Imperial walkers with their crude servo-motors.

The XV104 Riptide takes the evolution of the T'au battlesuit to a whole new level. First and foremost the model is huge, towering over the rest of the T'au even other battlesuits and tanks. Sleek and elegant armour panels, along with bolts and grills, cover its body. Despite its enormous size, with ball and socket joints it remains a manoeuvrable model whose arms and legs can be posed in a variety of different ways. Either standing tall or even kneeling down, you can use it as a unique, dynamic centrepiece for your T'au army. As well as three variant heads it comes with a range of weapons options including a heavy burst cannon, twin-linked smart missile systems, fusion blaster and Riptide shield generator. If that wasn't enough, the kit also comes with two Shielded Missile Drones.

This multi-part plastic kit contains 108 components and a T'au transfer sheet with which to make a XV104 Riptide Battlesuit and two Shielded Missile Drones.