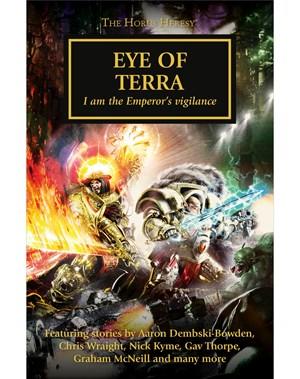 The Horus Heresy: Eye of Terra

THE STORY
The galaxy burns at Horuss command, and a billion more lives are lost with each passing moment though it was not always so. Once, the title of Warmaster stood for honour, loyalty and a fierce pride in the strength of the Space Marine Legions. But perhaps by following the myriad lines of destiny and defiance that were already woven around the primarchs and their sons, we may yet come to understand the bitterness that can eat away at even the most steadfast of souls

This Horus Heresy anthology contains fifteen short stories by authors such as Graham McNeill, Nick Kyme, Gav Thorpe and many more. Also, Aaron Dembski-Bowdens acclaimed novella Aurelian revisits Lorgars pilgrimage within the Eye of Terror, and examines just what could convince a true servant of the Emperor to embrace the powers of Chaos once more.

The audiobook edition has a running time of 12 hours 18 minutes and is narrated by John Banks and Toby Longworth.