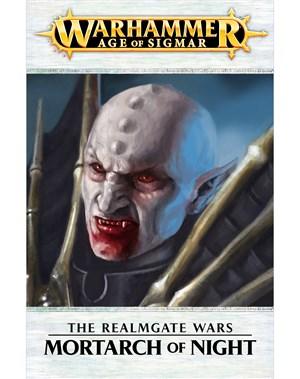 The Realmgate wars: Montarch of night

Long ago, Sigmar numbered Nagash among his allies, but the Master of Death betrayed the God-King, causing the great pantheon o gods to crumble as the Age of Chaos began. Now, Sigmar seeks to reform his ancient alliegiances - Tarsus Bull-Heart, Lord-Celestant of the Hallowed Knights, has been sent to the Vales of Sorrows with his Warrior Chamber to treat with the Great Necromancer. The Stormcast Eternals soon discover that Shyish is an unforgiving realm, and they are forced to accept aid from a vampire of dubious provenance, one whose name resonates throughout history: Manfred von Carstein. Tarsus and his Lord-Relictor Ramus both fear that there is more to their new guide than meets the eye, for it is well known that the dead cannot be trusted...

This anthology contains prose versions of the following audio dramas: The Prisoner of the Black Sun, Sands of Blood, The Lords of Helstone, Bridge of Seven Sorrows, The Beasts of Cartha, Fist of Mork, FIst of Gork, Great Red and Only the Faithful