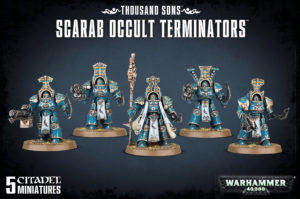 Scarab Occult Terminators were once the finest psykers in the Thousand Sons Legion, bodyguards to Magnus the Red himself. Reduced to dust along with their brethren, they now possess only an echo of their previous intellect. They stride into battle at the behest of their sorcerous masters, advancing with an eerie, stoic calm; clad in ornate armour, they bear down on the foe in near-silence until their weaponry is unleashed. Then, the sickening sound of khopesh blades and Inferno combi-bolters tearing into flesh rings out, delivering death to those who insult the warriors of Prospero with their resistance.

This multi-part plastic kit contains the components necessary to assemble 5 Scarab Occult Terminators, armed with Inferno combi-bolters and khopesh blades. One model can be assembled with an included heavy warpflamer, soulreaper cannon or hellfyre missile rack. One model can be assembled as a Scarab Occult Sorcerer, who can exchange his combi-bolter for an included power sword. Supplied with 5 Citadel 40mm Round bases.