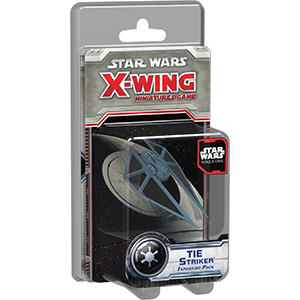 The sleek and agile TIE striker was developed primarily by Imperial forces stationed on planetary installations, where its adaptive ailerons and potent weaponry made it an excellent safeguard against Rebel incursions. The TIE striker and its adaptive ailerons come to life with the TIE Striker Expansion Pack for X-Wing™. It contains one highly detailed and pre-painted miniature TIE striker, along with six ship cards and three upgrades. These reflect the ship’s exceptional atmospheric maneuverability, as well as its use in Imperial swarm tactics.