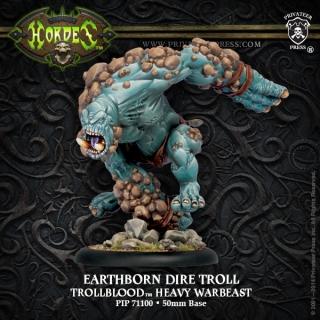 Earthborn dire trolls are the ultimate expression of troll adaptability. They possess a link to the wilderness and to Dhunia herself, for their bodies change to draw strength from the environment. Amid rocks and boulders their skin hardens to become like angled stone, while water lets them avoid attacks with fluid ease. Even their fists change to mimic the strength of the mightiest beasts and warjacks they face.

SPECIAL NOTE: PIP 71100 contains the same Mk II stat card as PIP 71022. The model in this box represent the same figure in the game. PIP 71100 is plastic rather than metal. The replaced PIP will no longer be available from Privateer Press beginning August 1, 2014.