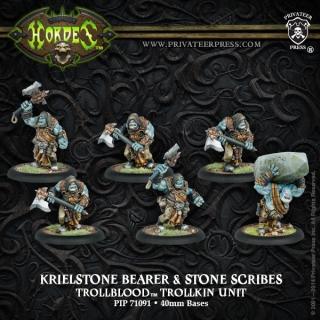 Sacred monuments of the trollkin, krielstones are carried into battle as reservoirs of spiritual energy. Only the strongest trollkin can bear the immensely heavy stones, which radiate an aura that protects nearby warriors. The accompanying stone scribes bear witness to the brave deeds of their kin and help capture the stone’s sacred power in their scrolls.

SPECIAL NOTE: PIP 71091 contains the same Mk II stat card as PIP 71017. The models in this box represent the same figures in the game. PIP 71091 replaces PIP 71017 and PIP 71018 by offering their contents in a complete unit. The replaced PIPs will no longer be available from Privateer Press beginning December 1, 2014.