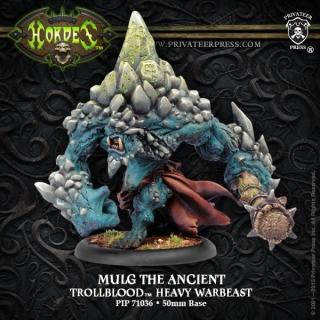 As reputedly the most ancient and ferocious dire troll ever to walk Caen, Mulg has become increasingly dangerous and tenacious over the centuries. Envious of trollkin sigils of power, he ordered runes carved into the stony flesh of his back depicting his many great deeds and ancient history. Mulg can focus his inhuman rage into these runes to stifle the power of enemy beasts.