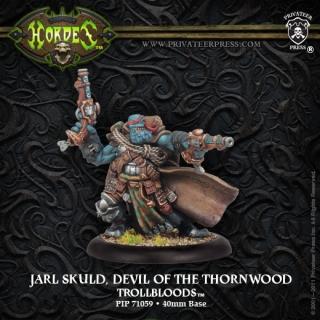 unlikely guerilla leader among the desperate trollkin remaining in the

Thornwood. A skilled gunfighter, Skuld uses a pair of customized,

rune-scribed pistols to deadly effect. With lightning raids and

devastating ambushes against Cryx, Khador, and other enemies of his

people, Jarl Skuld has truly earned the moniker 'Devil of the