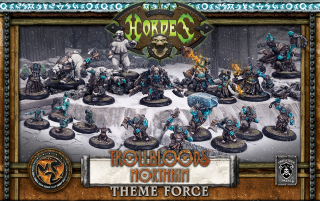 From a Land of Ice and Snow…

Out of the blizzards of the frozen north march the Northkin, a mighty alliance of resolute trollkin warriors. The Northkin rush to battle with axes in hand, the blood of trolls in their veins, and frost-rimed winter trolls at their side, and any who face them must confront the fury of the winter storm. Northkin shamans command the bone-chilling power of their homelands, and their warbeasts freeze the enemy in place before shattering them with their weapons.

Take command of these barbaric warriors with this box, which puts a full warband of Northkin in your hands ready to support your warlock’s battlegroup. Crush the enemy and drink deep in victory!