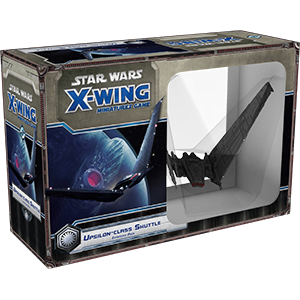 Make your opponents fear the First Order and the dark side of the Force with the Upsilon-class Shuttle Expansion Pack for X-Wing™! It features one pre-painted, large-base miniature of the sleek, predatory shuttle that the First Order typically used to escort its high-ranking officers. Boasting both powerful weapons and shields, the shuttle also comes with a full complement of fifteen upgrades. These include advanced new technologies as well as the dark side warrior Kylo Ren, who allows you to hinder your foes with his associated condition, I’ll Show You the Dark Side.