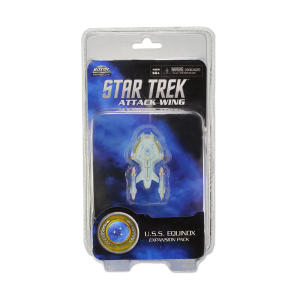 A Nova-class science vessel This type of vessel is used by the Federation for planetary research The Nova-class, though not designed for combat, typically has enough weaponry to hold its own in many battle situations Brought into the Delta Quadrant by the "Caretaker", Captain Rudolph Ransom and the crew of the U.S.S. Equinox found themselves seeking any way they could find to get home. The encountered an alien life form and by accident found that the remains of these creatures could augment their warp drive substantially. The crew believed that they could murder these creatures and use them to make their way back to the Alpha Quadrant. The aliens fought back against this genocide though, putting up a constant fight and continually weakening the Equinox's defenses. Eventually the Equinox was rescued by the U.S.S. Voyager, but the crew never gave up their secret war against the aliens and tried to take over and Voyager during their attempt to overcome the aliens.