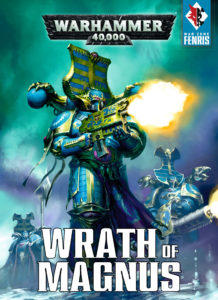 The skies of Fenris are aflame, the awful truth revealed. The Thousand Sons, hidden architects of the Space Wolves’ darkest hour, have launched an arcane invasion across those realms sacred to the Sons of Russ. The Wulfen’s Curse has taken hold, the daemonic invasions that followed it a precursor to deadly Imperial bombardments that saw Chapter set against Chapter. The bringer of this system-spanning doom is Magnus the Red, an ancient demigod overthrown by the Fenrisians of yore. With the daemon primarch’s reappearance in realspace, a vendetta ten thousand years in the making has flared into world-shattering violence. The Crimson King is back to conquer Fenris, and the legions of the Warp march with him.

War Zone Fenris: Wrath of Magnus is the concluding part of the saga that began with War Zone Fenris: Curse of the Wulfen, in which the Thousand Sons return to Fenris to enact vengeance on the hated Space Wolves – led by their Daemon Primarch, Magnus the Red.

This 136-page hardback book contains the thunderous, galaxy-shaking story of the Wrath of Magnus; set over 3 chapters, it features a huge selection of brand-new artwork supporting the story within. There’s also a uniform guide, with colours and icon guides for several Thousand Sons warbands:

Plus new and updated daemonic loci and icons of Chaos.