First Strike is the ideal first purchase to those new to the Warhammer 40,000 hobby an exciting fusion of collecting, painting and playing with highly detailed Citadel miniatures. The box is packed with everything needed to begin your hobby journey 2 sets of miniatures to battle with, and a double-sided gaming mat, a scenery piece, a book of rules and all the extras you need to play:

- 3 Primaris Intercessors clad in Mk X power armour, they are each armed with a bolt rifle and carry grenades. 1 model is a Sergeant, who leads the unit he has a holstered pistol and is easily identified by his bare, unhelmed head;

- 3 Primaris Reivers again clad in Mk X power armour, these Space Marines carry heavy bolt pistols and combat blades they distinguished by the sinister skull motif on their helmets, with the Sergeant featuring a half-skull faceplate.

- 3 Plague Marines each festering and bursting out of their armour due to the malign corruption of the Plague God Nurgle. 1 wields a boltgun, 1 is armed with a blight launcher and 1 the Champion, who leads the unit has a plasma gun, power fist and plague knife;

- 6 Poxwalkers these are the cursed victims of the plagues, transformed into living weapons. Each is armed with an improvised close combat weapon, with hammers, chains, planks of wood and metal pipes with nails in represented.

Everything you need to learn to play with your new miniatures is included in the box:

- a 24-page booklet containing the core rules for playing Warhammer 40,000, with each phase of the game explained in a clear, easy to follow manner from the initial setup to one sides victory;

- a 56-page book that guides you through the background, history and current state of the Warhammer 40,000 galaxy, with introductions to the Primaris Space Marines and Death Guard, as well as 9 other armies. It features step-by-step guides to painting your miniatures, with guides to the paints and brushes you need, along with a showcase of beautifully-painted miniatures to inspire your hobby journey. It also includes explanations of the different ways to play Warhammer 40,000, along with training missions that gradually introduce the core concepts to the total beginner;

- a 2 x 2 double-sided gaming mat one side is specially designed with icons showing you where to place miniatures in order to play the training missions, and the other has no markings, so you can play your own games. Each side is printed in full colour with an evocative design of a ruined Imperial city;

- a scenery piece! The inside tray of the box is designed to look like a set of armoured containers, meaning it can be placed on your mat as a piece of scenery for your miniatures to battle over;

- datasheets for the miniatures in the box these are handy cards with the information on movement and weapons for each model printed on, meaning less flipping through books for information and more actual gaming;

- 6 6-sided dice, and a 6 translucent measuring ruler, each vitally important for games;

- 9 32mm and 6 40mm round plastic bases for your miniatures to stand upon. 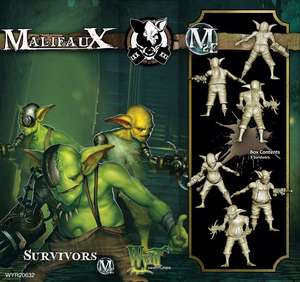