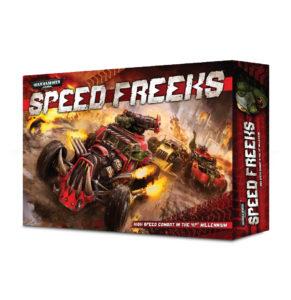 Speed Freeks is a game for 2 or more players. Each player commands a Speedmob of Ork wagons and warbikes in high-speed adrenaline-fuelled combat. You’ll need to kustomise your vehicles and pull off daring manoeuvres to win, but that isn’t easy when your team consists of velocity-addicted greenskin maniacs. Players take turns picking models to move, shoot and attack up close, aiming to destroy their rival racers and become the greatest Speedmob in the galaxy!

A 24-page core rules manual describes in anarchic detail everything you need to know in order to get a good rumble going:
- Start Yer Enginz!: a description of the scrap-strewn wastelands of Vigilus – the perfect breeding ground for a Speedwaaagh! and the setting for your games. Ork adrenaline junkies (i.e. all of them…) come from far and wide to cobble together the very best wagons they can, in the hope of catching up with Wazdakka Gutsmek – the fastest Ork of all time;
- General Rulez: a quick overview of basic items to use and an easy to follow glossary;
- The Game Round: explanations of the 4 basic Phases of the game – Kunnin’ Phase, Speedin’ Phase, Shootin’ Phase and Fightin’ Phase – including rules on movement, resolving attacks, ramming, drifting, using gubbinz and going as fast as Orkishly possible;
- Rukks: 4 scenarios to play out, mostly involving smashing into each other really, really fast, with a little advice on creating your own;
- Additional Rules: some optional rules which, while not necessary to playing Speed Freeks, can be used to add extra depth. This includes rules for specific Clans, as well as guidance on paying local Mekboyz to add more and more gubbinz to your vehicle;
- Campaignz: a guide to playing campaigns, surprisingly enough – narrative, ladder and linear campaigns are covered, with tips on running your own racing championships;
- Da Showroom: a selection of beautifully painted Citadel miniatures, showing you just how killy and fast your own Ork contraptions can look.

- A Kustom Boosta-Blasta: rather resembling the sort of overpowered beach buggy you might have found on ancient Terra in times long past, this vehicle is built for pure speed with a minimal rollcage, spiked tyres and a frankly ostentatious engine block/exhaust assembly. The hulking brute of a driver barely fits into the cockpit, his many Cybork augmentations squishing him into his seat – not a problem for his accompanying Grot, who hangs out of the passenger side gleefully. Another Ork mans the enormous rivet kannon attached to the roof, with the whole ensemble topped off nicely by a ton of spikes and horns. Includes a Citadel 150mm Oval base;
- A Shokkjump Dragsta: low to the ground and surprisingly aerodynamic (at least for an Ork vehicle), the Shokkjump Dragsta is a remarkable feat of engineering. Wide, slick tyres, spiky spoilers and a HUGE air intake give it a pleasingly serious air, which is offset rather by the Ork icons, rivets and grinding blades at the front. A Grot rides shotgun – well, shokk gun; this fearsome weapon is mounted to the side. The exposed engine assembly at the rear uses similar technology, ripping open reality to transport the Dragsta to new places immediately (which surely cannot go wrong, right?) Includes a Citadel 150mm Oval base;
- 6 Warbikers: a touch more ramshackle than the other vehicles, these Warbikes are little more than massive engines lashed to bit of scaffold and spikes, finished by bits of rusted metal and animal skulls. Included are options for building 2 of the Warbikers as Ork Nobs, with a host of axes, clubs and stikkbombs with which to kit them out;
- A set of barricades: this comprises 3 barriers and 3 piles of detritus used to mark the courses around which the Orks zoom. Chunks of scrap, wreckage, tyres – pretty much anything not nailed down is used by Orks to make their races exciting!

All the extras, accessories and bits you need to play games are here:

- 12 datacards, providing the rules and stats for vehicles;
- 48 damage cards, drawn when a vehicle is smashed about in combat;
- 24 Kustom Job cards, describing upgrades models can gain;
- 4 folded card double-sided gameboards, which can be set up in a variety of configurations;
- 2 Speed Freeks dashboards and screens, used to keep your dice allocation secret from your opponent;
- 2 sheets of tokens, fire arc markers and movement templates;
- A plastic range ruler;
- 20 special 6-sided Speed Freeks dice (10 red, 10 yellow);
- 1 8-sided dice – this is used to (hopefully) pass your drivin’ test, amongst other things...