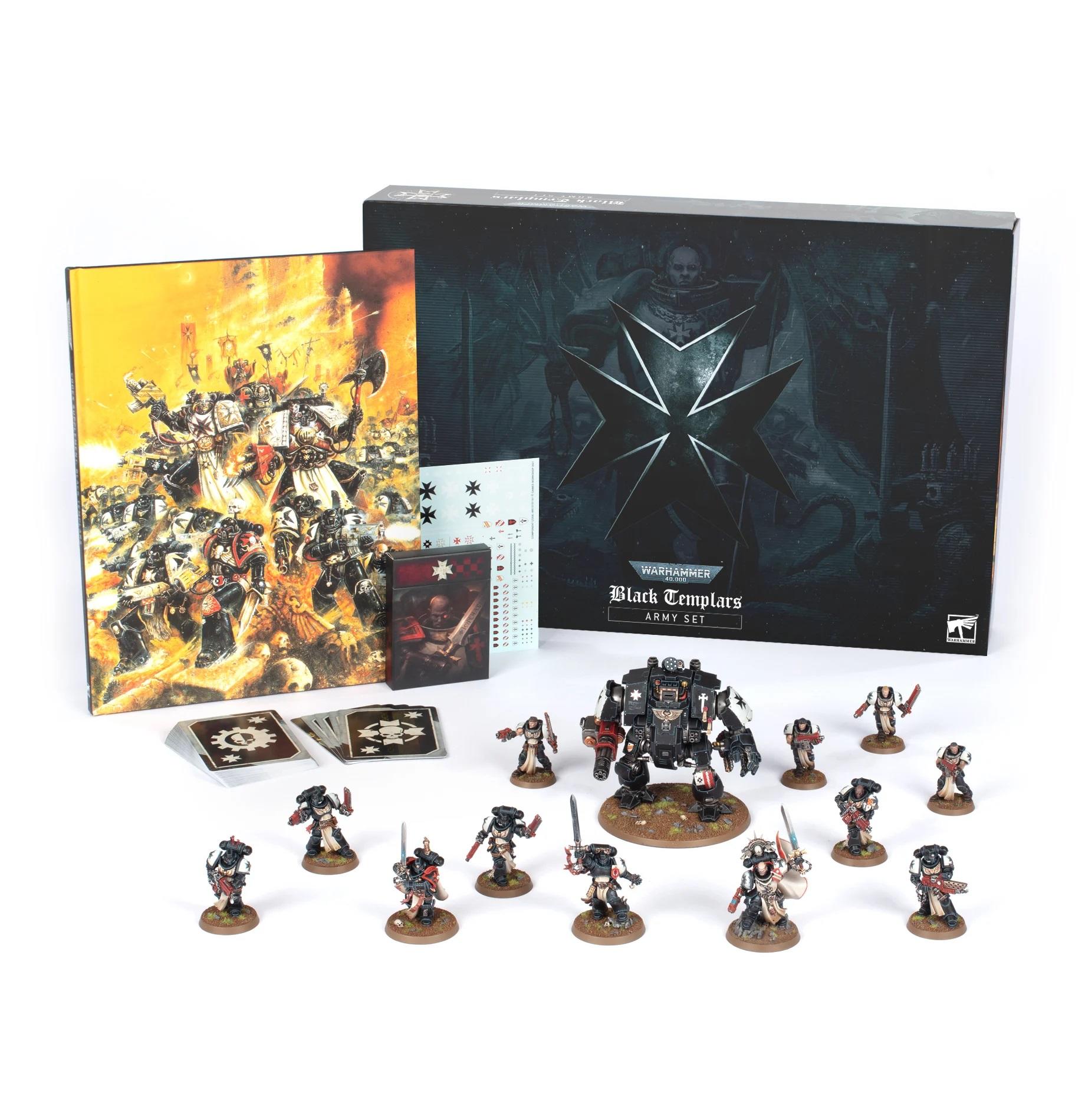 The Black Templars are relentless crusaders who sweep across the galaxy in a tide of fire and blood. Worshipping the God-Emperor as a deity, they swear mighty oaths to purge His realm of mutants, traitors, heretics, and witches. Driven ever onward by their fury and faith, these fanatical warriors will not rest until every heretic idol lies toppled, and every Imperial world is purged of foes.Suffer Not the Unclean to Live.Uphold the Honour of the Emperor.Abhor the Witch, Destroy the Witch.Accept Any Challenge, No Matter the Odds.This Black Templars Army Set is stuffed with stunning new all-Primaris Black Templars models, including a Marshal, Emperor's Champion, Neophytes, Initiates, and a Sword Brother. Not only do you get a full 13 models in the box, you'll also find the exclusive Codex Supplement: Black Templars featuring classic wrap-around artwork - it's the only way to get early access to their updated rules and background material. You'll also find a multipart plastic Redemptor Dreadnought in there to support your Eternal Crusade, plus a set of 28 handy reference cards for Templar Vows and Stratagems, 16 of which are new and exclusive to the Black Templars. Also included in this set is a Black Templars Transfer Sheet with a massive 226 individual Chapter icons in various sizes and colours, as well as honour markings and personal heraldry.The set includes the following multipart plastic miniatures:- 1x Black Templars Marshal (supplied with a Citadel 40mm Round Base)- 1x The Emperor's Champion (supplied with a Citadel 40mm Round Base)- 1x Redemptor Dreadnought (supplied with a Citadel 90mm Round Base)- 1x Black Templars Primaris Crusader Squad – including: 1x Primaris Sword Brother, 5x Primaris Initiates and 4x Primaris Neophytes. (supplied with 1x Citadel 40mm Round Base, 5x Citadel 32mm Round Bases, and 4x Citadel 28mm Round Bases)Also included:- Codex Supplement: Black Templars - 80-page hardback book with a soft-touch cover, gloss art, and an exclusive cover- Datacards: Black Templar - 28 cards including 1 art card, 7 Core Stratagems, 4 Templar Vows, and 16 Black Templars Stratagems- 1x Black Templars Transfer Sheet including 226 individual transfersThese miniatures are supplied unpainted and require assembly - we recommend using Citadel Plastic Glue and Citadel paints.