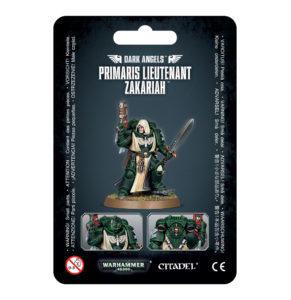 Lieutenants act as the right hands of their Captains by providing flexibility and helping to direct their battle-brothers in engagements. Battle Companies are often split into 2 Demi-companies, each of which falls under the command of a Lieutenant who leads his brothers unflinchingly into battle. The position gives rising leaders experience in command, and the longest-serving Lieutenants of the Dark Angels are presented with robes and cowls – the austere markings of a veteran amongst the descendants of the First Legion.

This multi-part plastic kit contains the components necessary to assemble Primaris Lieutenant Zakariah of the Dark Angels. He wears Mk X power armour, over which are the robes that mark him out as a particularly notable servant of the Chapter. He carries a plasma pistol and power sword, and his armour features several pieces of ornate Dark Angels detail – the left shoulder pad has a sculpted Chapter icon, while the right pad has a space for painting. He features a knife and book icon hanging from his belt, and a choice of heads – one is a Dark Angels helmet, and the other is a not-quite-bare cowled head, with eye implant.

Lieutenant Zakariah comes as 11 components, and is supplied with a Citadel 40mm Round base.