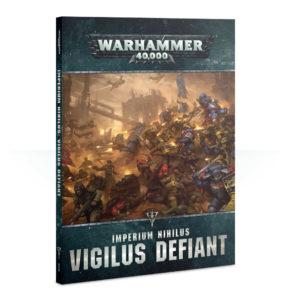 War ravages the sentinel world of Vigilus. Though beset by an Ork Speedwaagh! and a Genestealer Cult uprising, its crucial location at the mouth of the Nachmund Gauntlet makes it an invaluable asset to the Imperium – one that its people will fight to the last to defend. Yet this defiance may cost the Imperium dearly, for on top of all the planet’s woes, a Chaos invasion has begun, led by a warlord claiming to be the herald of Abaddon himself!