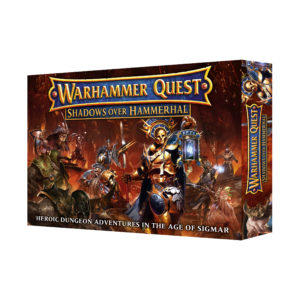 Hammerhal. Built in the glorious image of Azyrheim, the seat of the God-King Sigmars power. Within its walls can be found danger and beauty, faith and intrigue, poverty and fortune. From the gleaming crystal spires of Goldenpath to the mist-shrouded vineways of Ghyra-un-Tyr, there is seemingly no end to its marvels. Yet most who witness this splendour know little of the danger and menace that fill the outer districts of the city, and that which lurks below

A band of heroes has been brought together by circumstance, and are bound to hunt down and nullify a sinister Chaos plot in the dungeons and catacombs below Hammerhal. Lord-Castellant Arvios Sunhelm, his Gryph-hound Archimaine and Cogsmith Golnir Coalbeard are joined by Loremaster Alnaryn and Fleetmaster Vizrin Kyre, as they quest to uncover the Chaos Sorcerer Lord Redomir and put a halt to the vile corruption of the First City of Order.

Warhammer Quest Shadows Over Hammerhal is a boxed game for 2-5 players, set in and below the splendid city of Order, Hammerhal. Up to 4 players can quest in the catacombs and dungeons below the city, while another acts as gamemaster, setting fiendish obstacles, controlling the antagonists and setting the story its up to this player to take charge of revealing the secrets each dungeon has to offer.

After each adventure, the heroes can spend time in the Cinderfall district of the city, visiting shops, resting and taking part in the various shadowy delights Hammerhal has to offer! Your characters level up and increase their skills as you play, and Warhammer Quest Shadows Over Hammerhal is completely compatible with the Warhammer Quest: Silver Tower Hero Cards any miniatures or rules you already own for that game can be used here.

As well as this, the box includes a 72-page guidebook, a 32-page adventure book for the gamemaster to use, 18 double-sided board sections, 55 cards, 12 dice and a variety of counters and markers for tracking your heroes as they gain experience and skills under the city of Hammerhal.