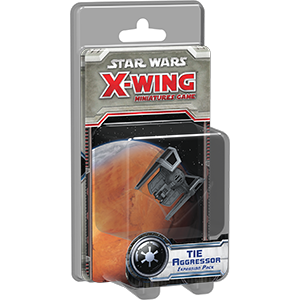 New As supplied by the Galactic Empire

The TIE aggressor was designed for long missions, supply chain raids, and tactical flexibility, and in X-Wing, it can lend a great deal of tactical flexibility to your Imperial fleet. Much of this versatility comes through the ship's ability to equip a turret weapon and a pair of missiles. Altogether, the TIE Aggressor Expansion Pack pairs its pre-painted miniature starfighter with four ship cards and five upgrades, plus everything else you need to fly the ship to battle.