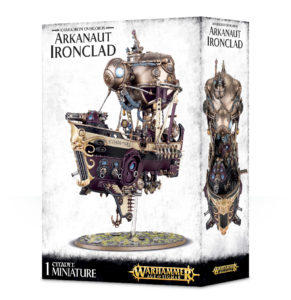 The jewel in the crown of the fleet, the Arkanaut Ironclad is a majestic airship. Bristling with weaponry, its deep cargo holds can be laden with aether-gold or it can be loaded to the gunwales with Arkanaut Companies or Grundstok Thunderers. Advancements made by the Kharadrons endrineers have allowed for ever-larger vessels of the skyfleet, and the Ironclad is to date the biggest. Clad in layer upon layer of riveted iron plates, these massive ships pour astonishing amounts of aether-shot, bombs and torpedoes on anything with the temerity to get between the Kharadron Overlords and their bounty of aether-gold.

This multi-part plastic kit contains the components necessary to assemble an Arkanaut Ironclad. Befitting its status as the flagship of a Kharadron skyfleet, this model is of an impressive size, and is absolutely covered in weaponry. For a main gun, you have a choice of great sky cannon, great skyhook, and aethermatic volley gun, with aethershot carbines, a supremacy mine, aethershock torpedoes, detonation drills, fragmentation charges and grudgesettler bombs attached to the hull.

The ship itself is held aloft by a massive dirigible covered in detailed pipework and fittings, and features a huge array of customisable features the crows nest can feature either a navigator or signaller Kharadron with their own telescope and light box, and theres a ton of rigging, bomb racks, ladders and various ships paraphernalia to place wherever youd like. Its covered in aerofoils which can be modelled to show the direction of travel, and a complex-looking system of cogs driving the rudder. Theres even a plank which those foolish enough to be captured will be forced to walk

The crew of the Ironclad are every bit as detailed as the vessel they man, with a captain standing at the ships wheel; an endrinrigger with various tools hanging off the side, fixing an important leak; a gunner to stand at the main weapon and the aforementioned signaller and navigator.

This kit comprises 152 components, and is supplied with a Citadel 170mm Round base and 50mm ball and socket flying stem.