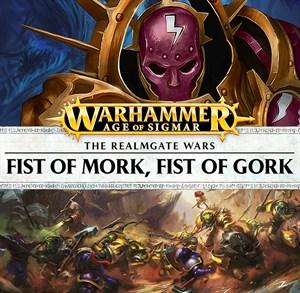 After a bloody triumph at the siege of Cartha, Lord-Relictor Ramus’ Hallowed Knights and the Astral Templars of Knight-Azyros Vandalus press on with their search for Mannfred von Carstein, but they soon learn that orruks, not ogors, hold sway in the Carthic Oldwoods. The Stormcast Eternals must overcome not only these brutish warriors, but also the will of their gods. Ramus and Vandalus must prevail against the fist of Gork and the fist of Mork if they are to forge a path to the Sea of Bones where their hated quarry awaits.