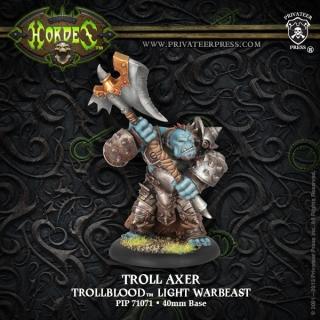 Massive axe in hand, the troll axer is a monster of corded muscle capable of cleaving through a wall of men in a single blow. These full-blood trolls are renowned for their incredible resiliency, as their regenerative qualities allow them to shrug off wounds that would kill lesser beings. Trollkin leaders use axers extensively to bolster battle lines; indeed, the presence of just a few axers can make all the difference to a trollkin army.