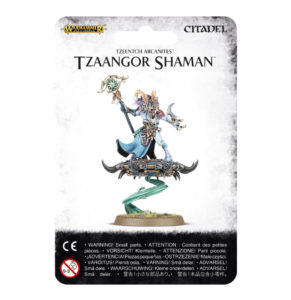 Gifted with arcane abilities, precognitive visions and savage intelligence, Tzaangor Shamans are the most powerful of their kind. Born beneath dark omens, they are born to greatness, gifted with Discs of Tzeentch that raise them figuratively and literally above the heads of their peers. With dark magics they can grant a dubious boon to their foes – mutating them into a form infinitely more pleasing to Tzeentch, that of a new Tzaangor. Not content to hang back and rely on magic, the Tzaangor Shaman is a formidable close-range fighter, attacking savagely.

This multi-part plastic kit contains the components necessary to assemble a Tzaangor Shaman. Wielding a ritual dagger and staff of change, he hovers above the ground on an elaborate Disc of Tzeentch, covered in sharp teeth and spiked horns, attached to the base with a sculpted representation of the powerful magics holding it aloft. He’s covered in ornate pieces of Tzeentchian armour, and carries an elixir which could possibly enhance his already impressive sorcerous abilities even further with a single great draught.

This kit comprises 16 components, and is supplied with a Citadel 40mm Round base.