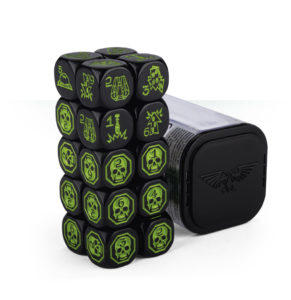 Keep track of your Command Points and squad status in games of Warhammer 40,000 with this set of 20 6-sided dice. One advantage of fielding a Battle-forged army is the Command Points your selection of Detachments confer these points can be spent on Stratagems, which confer strategic and tactical advantage.

14 of the dice in this set feature numbers which allow you to keep track of the points youve spent enough to keep a fairly large game under control. 6 of the dice are used to show a variety of combat statuses as outlined in the Warhammer 40,000 rules, making it easy to keep track of where in the phases of the game you are.