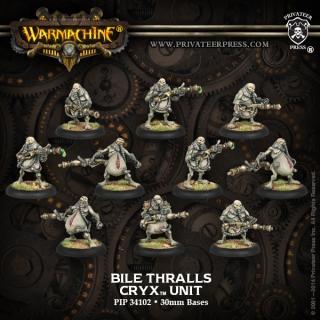 The bloated bodies of bile thralls are walking vessels for volumes of corrosive digestive and decomposition agents, with hoses and tubes leading from their distended mouths and fabricated orifices to crude firing mechanisms. With a lurching spasm, each bile thrall can force a starting volume of caustic fluid out over a wide area to dissolve flesh and devour tempered metal.

SPECIAL NOTE: PIP 34102 contains the same Mk II stat card as PIP 34020. The models in this box represent the same figures in the game. PIP 34102 replaces PIP 34020 and PIP 34012 by offering their contents in a complete unit. The replaced PIPs will no longer be available from Privateer Press beginning July 1, 2014.